When I was pregnant, I fretted over finding the perfect

name for my baby and I spent hours trying to imagine what my baby’s face would look like.  While I had no say in the baby’s facial features, the name was on me.  This was no little task.  Names are important.  I would latch on to one name for a day or so, try it out by saying it out loud over and over.  Meanwhile, I would pat my baby bump while repeating it, with hopes of getting a kick of approval from the child who would go through life with this name.  I dreamed up dozens of names, some of them were a bit ridiculous.  I opted out of naming it after my grandfather.  Burnett Bankhead Craig.  Nope, that just didn’t work.  I know some people who have several names picked out and they wait to see the baby’s face before making a final decision.  And that makes sense; a name should be reflective of person’s character.  I’ve heard of some couples having heated arguments over a baby’s name.  Basically, naming a baby is hard work.

Well, since I’ve been a writer, I’ve realized that picking out a title for a book, is much like naming a child.  You want it to be reflective of what the book is about.   But like most parents who name the child before it’s born, most writers pick a title before they’re even finished with a manuscript.  Heck, some writers have a title before they even have a plot.  And just like choosing a name for your baby, you don’t want the title of your book to sound stupid, or be one that everyone will poke fun of.  It would be as bad as naming a boy Anne, or Burnett.  (Yeah, I know, I gave the name to one of my characters, but he’s vampire and no one would poke fun at him.)  You want the name of your book to be unique, but not so unique that people can’t remember it.  Nor do you want it to be so common that everyone and their pet gerbil has the same name.  And as parents are often known to argue over names, some writers argue with their publishers over titles.  And guess what?   Generally speaking, a publisher has the final say over the title of author’s book.

Not that it’s always a bad thing.  Publishing professionals often have a keen insight to the market.  When I first wrote Born at Midnight, I titled it, Bone Creek Camp.  I was told they liked the title to use for the series, but I needed another name for the book.  So I came up with, The Secret, referring to the secret Kylie’s parents always kept hidden from her.  My editor liked it, but said with the nonfiction book “The Secret” already out, she thought we’d best go with something different.  I came up with several other titles, one of which was Born at Midnight.  Everyone was happy.  But then the publisher took the title of the series and the book to the marketing department.  They thought Bone Creek Camp sounded like a western novel.  I had to admit, they had a point.

So it was back to the grindstone on titles for the series.  My editor came up with several.  I picked my favorite title from hers.  I liked Shadow Falls, but duh, at the time the book didn’t have a falls in it.  So I went back into the book and found a way to work in a waterfall.  And I loved what happened.  The whole concept of the falls kept adding layers to the plot.  While Kylie never makes it to the falls in book one, in book two, the scene at the falls is one of my favorite.

Then it was time to name the second book.  I came up with Cold at Dawn, referring to how Kylie’s ghost has a bad habit of waking her up at dawn with the icy chill of the spirit’s presence.  My editor countered with Awake at Dawn.  It made sense and I liked it, so we didn’t even have to get out the name-that-book boxing gloves.  And last week, like getting the initial peek at my baby’s face, I got my first glimpse of Awake At Dawn’s cover.  Amazingly, they depicted the scene where Kylie first saw the falls.  I love it. 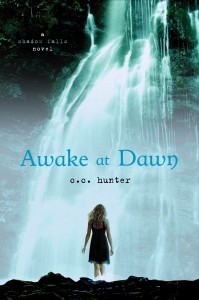 Since we’re talking names and titles, I thought it might be interesting to hear what you think of your own names?  Did your parents do you a favor by giving you the name you have, or do you wonder what the heck they were thinking?  If you could change your name, what would you change it to be?  And . . . since you are all readers, tell me what you like to see in a title and a cover in a book?  Does a title or cover provoke you to buy a book?

One person who posts will win a goodie

bag of Shadow Falls swag, which includes a bookmark, a brush and mirror compact, a pen, a notepad, and a signed bookplate.  So come on, let’s have fun and post some comments.  Oh, and make sure you come back tomorrow to see who won and send me your snail mail address so I can send you prize.