Today, I’ve got a real treat for you.  Debut YA author Amanda Brice’s debut YA novel CODENAME: DANCER released last week, and I can’t wait to read it.  Amanda blogs with my alter ego, Christie Craig, over at Killer Fiction, and I’m really excited to have her join me.  So…take it away, Amanda!

I admit it. I’m obsessed with Dancing with the Stars. Despite the fact that each year the star quality gets dimmer, I just can’t help it. I have to watch.

I started dancing at age 3, when my mom enrolled me in a ballet and tap combo class. My parents still have my yellow Cuddly Duck costume from my very first dance recital, which will be 30 years ago this June! Throughout the years, I started taking more styles and more classes per week until I was dancing nearly 30 hours per week as a teen. Tap was always my best style, although I also did ballet (including pointe), jazz, lyrical, novelty, contemporary, and then later I studied flamenco and ballroom.

I danced on the ballroom dance team in college, which was a total blast. We traveled all over the East Coast for competitions against other schools. My favorite memory was a spur-of-the-moment decision to enter the open Lindy Hop competition at the Ohio Star Ball with my friend Jonathan. We’d never even attempted lifts before the night before…literally! But we decided to do it, and lo and behold we made it to the finals, which meant all bets were off. We could do any aerial moves we wanted.

And we won!!!! That was a real shock, but so much fun! And all the better since we dressed the part, with me in a vintage 1940s dress and saddle shoes.

I know it sounds cheesy, but dance is in my blood. So when I decided to write a YA mystery, I knew it would feature a heroine who was a dancer. I had this idea to set a series at a performing arts boarding school because it would give rise to an ensemble cast of quirky creative types to get into all kinds of scrapes. 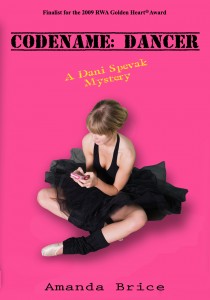 Then one night I was watching DWTS and it hit me. What if teen celebs came to the school to film a new reality series? And thus Codename: Dancer was born.

I got to appease my celebrity Gawker/TMZ-obsession and create my own cool crime-solving chick (who I’d hoped would be a hipper Nancy Drew). Perfect!

What’s your reality TV guilty secret? Leave a comment and one lucky commenter will win an e-book copy of Codename: Dancer.

Amanda Brice lives outside Washington, DC with her husband and toddler daughter. An intellectual property attorney for a large federal government agency, she combines her love of writing with her legal career by speaking on basic copyright and trademark law on the writers’ conference circuit. Her debut novel, Codename: Dancer, was released last week. You can learn more about Amanda and her books at her website (http://amandabrice.net/).

Thanks, Amanda!  In addition, I’ll also give away a copy of Born at Midnight, so let’s get those comments going!