Contest!  Contest!  Today I’m giving away a $10 Barnes and Noble gift card and my new, Awake at Dawn, flashlight/pen, to one lucky person who leaves a comment.  So make sure you leave a comment.  The winner will be announced on top of this blogpost tomorrow.  So don’t forget to come back and see if you won!

WINNER!  Katelynn you won the $10 gift card and pen.  Please email me at cc(at)cchunterbooks.com

Thanks to everyone who posted.  I post blogs every Tuesday so make sure you stop by.  CC

CC Hunter Sits Down with her Character, Kylie Galen 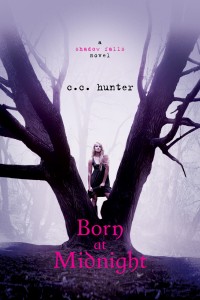 “Hi, Kylie.  Come on in and sit down,” I say when she appears at the door.

Kylie stops at the entrance and looks around.  “What is this place?”

“It’s eerie.”  She shivers and looks at all the dark, shadowy nooks, places where I keep plot ideas, plots gone wrong, plots on hold, or pieces of scenes that I haven’t quite developed.

“Yeah!  Eerie stuff.”  She moves in and hugs herself.  Sitting down on the large tan, butter-soft leather sofa, she stares off in one corner.

I follow her gaze.  “Oh, that’s nobody.  Just someone I killed.  I thought I’d keep him for a while until I figure out exactly how he died.”

“You don’t know how he died?  But you just said you killed him.”

“Well, I didn’t really kill him.  I let someone else do it.  I don’t like getting my hands bloody.  But now I have to figure out how it happened.”

“Seriously?”  She shakes her head.  “Do you ever worry about yourself?”

I pause and think about it.  “Sometimes.  But hey…I always end a story on a happy note.”

“True,” I admit and decide to think about that later.

“Why am I here?” she asks, still hugging herself.

“Because Reggie the blogger wanted me to interview you.”  I try to get comfortable and ignore the dead guy, who is now seriously beginning to freak me out as well as Kylie.

“I don’t like being here too much,” she says.

“It reminds me of being on Dr. Day’s couch.  The shrink my mom sent me to because I started seeing ghosts.”

“I thought she was a flake.  Come to find out, she’s just a fairy.”  Kylie continues to look around.  “Can I ask you something?”

I lean forward and my chair squeaks.  “I think I’m the one who’s supposed to be asking you questions.”

“Humor me,” she says and when I nod, she continues.  “What’s up with the eagle and snake thing that happened today?”

“Oh, that?  Well, you’ll figure it out later.  Besides, we can’t really talk about that right now.”

“Because that happens in book three, Taken at Dusk.  And that book doesn’t come out until 2012, so we don’t want to spoil anything for the readers.  We have to talk about things that happened in book one, Born at Midnight”

“Okay,” she says, not sounding happy.  “So what questions do you have?”   Then she frowns.  “Wait.  You created me.  Which means you know my answers.  Why do you even have to ask me anything?”

“I don’t know all the answers,” I say and point to the dead body.  “In a weird way, you’re like him.  I haven’t figured you out yet.  And even if I had, you don’t always do what I say.  For example, what if I told you that tomorrow you’re going to kick both Lucas and Derek to the curb and start falling for Burnett or Perry.”

“Are you nuts?” Kylie asked.  “Burnett?  I mean, he’s totally hot, but he’s way too old for me.  And you know sooner or later, he and Holiday are going to get over their pasts and hook up.  As for Perry?  Please, he is so not my type.  Besides, I wouldn’t want to hurt Miranda, or tick her off.  That pinky finger of hers can throw some pretty wild curses now that she’s gotten a better handle on her dyslexia.  And what if she messes up?  Don’t you remember what she did to Socks, my cat, in book two?”

I grin.  “Yeah, that was pretty funny.  But don’t you see my point?  You don’t always do what I tell you.  I might have created you, given you a past, and a basic belief system, but you don’t do everything I want you to do.  Sometimes you tell me what going to happen next.”

“I do most of what you want.  I only reject the stupid stuff, the stuff that doesn’t make sense.”

“That’s true,” I say.  “As a character, you’re pretty easy to work with.  But let’s get back to the questions.  The one I know everyone wants me to ask you.  Who do you want to end up with at the end of the series?  Derek or Lucas?”

“Don’t you remember what his grandmother told me?”  Kylie suddenly jumps back.  “Did you see that?”  She waves at the dead guy.  “He’s not dead.  He just moved.”

I feel my heart drop as I look over in the corner.  “He can’t be alive.”  My breath catches as I watch the man I thought was dead stand up and glare at me.

“Yes, he is!”  Kylie scoots down the sofa, farther away from my scene in process.  “Please tell me you’re not going to put him in my book?  I do not want him at Shadow Falls!  Put him in one of those other books you write!”

“I haven’t decided what book he’s going in yet,” I tell her as the presumed dead guy walks away.  I look back at Kylie.  “You know what, I should probably go follow that man and see what’s happening.”

“Do I have to stay here?” she asks and looks around frowning, as if not liking my mind.

“Nah, you can back to your scene in chapter four.”

I start out and I hear her say…”By the way, I don’t like the whole eagle and snake thing.”

I look back over my shoulder.  “Yeah, I know.  And I’m sorry about that but it’s staying in the book.  It’s what writers do.  We create scenes that force our characters to deal with things they’d rather not deal with.  It’s called conflict.”  Then I rush out to catch up with my dead guy who isn’t dead.  Hmm, I might be able to use this…could someone come back alive?  However, I guess I’d better end this interview now.