It’s coming.  I swear, it’s coming soon.  The release of Awake at Dawn is less than six weeks away now.  Below are just a few more teasers about what’s going on in Awake at Dawn, book 2 of my Shadow Falls series.

Five Things Kylie Doesn’t like in Awake at Dawn:

1.  Derek keeping things to himself.  (Didn’t they used to tell each other everything?)

2.  Anyone picking on her mom.  (Wanna see Kylie finally get mad?  You will when someone threatens her mother.)

3.  Having dreams she doesn’t understand.  (Is someone messing with Kylie’s dreams?  Is that someone a hot werewolf named Lucas?)

4.  Rude werewolves.  (And it’s not just Fredericka this time.)

5.  Anyone accusing her friends of doing bad things that they didn’t do.  (No one is perfect, but she refuses to believe someone she loves could do terrible things.)

October 11th is getting closer.  (And, yes, I’m still staring at the Countdown Clock on my website.)  I’m starting to set up some booksignings, as well as library and school events for the month of October to celebrate the release of Awake at Dawn, book 2 of my Shadow Falls series.   As if that won’t keep me busy enough , I’m also going to be doing a final polish of Taken at Dusk, book three in the next few weeks.

Now, I can’t give you the answers to these five questions – well, not yet anyway.  I promise you they will be all explained in Awake at Dawn.  So, get your imaginations all fired up and read the five things that worries Kylie most in AAD.  Feel free to share your guesses about the answers in the comments section.

Have a great day, guys!

3)       If some of the supernaturals can hear her heart beat and others can read her emotions, can they also tell what she’s feeling whenever Derek gets close to her?

4)       What will she find out when she finally makes it to the waterfalls?  And who is it that she spies behind that wall of water?

5)       Will Holiday and Burnett, and Miranda and Della, ever stop fighting?

Because so many of you have asked for more time to get your entries ready for my Be My Star contest, I’ve decided to move back the date for receipt of your videos and photos with captions to September 15th.  But remember!  You’ll need to submit the release form first before I can accept your entry.

So, what’s the Be My Star contest about?  It’s a chance for you to share your love of my Shadow Falls series, talk about your favorite scene from Born at Midnight or explain why you’re Team Lucas or Team Derek by shooting a short video of 30 seconds in length or by sending me a photo with caption.  (Keep it PG-13, please.)

My plan is to get several videos and photos, pull bits and pieces from them, and make a Shadow Falls video.   The video will be posted on my website and will be used in PR wherever book videos are used to promote my series.  There will be lots of prizes, too.  (Go here for more details – http://cchunterbooks.com/blog/2011/06/be-my-star-contest/ )

To enter the contest, you need to do the following:

2.     Send me a PG-13 rated 30-second video clip OR a single photo with caption that illustrates one of the following:

a.     Why you love my Shadow Falls series

c.     Why you think people should read my Shadow Falls series.

3.     Make sure you get your signed release form and photo or video to me by the deadline, September 1st.

That’s it.  You can do this as a solo project or you can get together with a friend and create something together.  Be creative and have fun.

I don’t know about you, but I’ve never been known for my patience.  When I was a kid, knowing my birthday was just around the corner, I would keep an eye on my parents, looking for clues about my birthday present.  If I was lucky, I would hear them actually discussing the gift I was going to get.  And if I didn’t figure out what they were getting me, I would sometimes learn the gift’s hiding place.  (Not that I would ever sneak into the living room, grab a chair and check out the top shelf of the hall closet in the middle of the night or anything.)  Christmas was the same way.  Waiting was hard.  I wanted my goodies and I wanted them now.

I haven’t gotten any better at waiting as an adult, either.  And unfortunately, the publishing business is all about waiting.  Take the release of Awake at Dawn, book 2 of my Shadow Falls series.  It’s scheduled to release on October 11th but that seems like way too long for me.  The only thing that makes the wait bearable is having the Countdown Clock on my website’s main page.  Whenever I’m wondering how many more days, weeks or months till the book’s release, I can swing by and find out.  Then I just sit there in a hypnotic trance and watch it count down.  Actually what I’m doing is trying to move it faster with my brain.  (Hey…I’m that desperate. And I’ve heard about people who can bend spoons, so why can’t I make time go faster?)  This is generally when my husband will come into my office and ask, “What are you doing?”

I always tell him the same answer, “Working.”  (No way am I going to tell him I’m trying to make time go faster.  He already assumes I’m crazy when I start talking about Kylie, Derek, and Lucas as if they are real people.)

And seriously I am working, I think those hypnotic trances are crucial to jumpstarting the brain.  I also know waiting is part of this job.  Because I seem to do a lot of waiting as a writer.  Waiting for a story/plot to jell.  Waiting for my editors to read a story/plot that finally jelled.  Waiting to get a contract on that jelled plot/story.  Waiting to see the cover, waiting to get the ARCs, waiting for the book to come out.  It’s all about the waiting and as I mentioned, I totally suck at waiting.

Anyway, other than going and staring at my countdown clock, I’ve found a couple of other coping techniques for my waiting.

I try to forget about it.  (This only works for short intervals like maybe a couple of hours.  And it helps if I have good chocolate to eat during that time.)

I try to lose myself in my next book.  (This technique works pretty good, until I hit on the least little hiccup and then my mind goes right back to thinking about October 11th and how it feels as if it will never, ever come.)

I fantasize about the release.  I imagine that I walk into a bookstore and I see the bookseller putting my book on the shelf.  And there is a line all the way around the bookstore of people who have to have their copy.  LOL.  Hey, it’s a fantasy.   I might as well make it good!)

Now, several people have emailed and begged for insights to what’s going to happen in Awake at Dawn because they are as bad at waiting as I am.  Well, I can’t tell you a whole lot, but here are a few teasers.

•   Miranda gets kissed twice in the book.   And only one of them is by Perry.
•   Della gets accused of doing something really bad, and the scary part is that she doesn’t know if she’s guilty or not.
•   Miranda has a spell go way wrong and this time, she can’t fix it.
•   Kylie gets another letter from Lucas.
•   Derek asks Kylie to go out with him.
•   Fredericka and Kylie have a little issue.  And let’s just say that Fredericka ends up being a real stinker!

So, what about you?  Are you a patient person?  Or are you as impatient as I am?  And if you are, what tricks do you have for coping when you want an event to hurry up and just get here?

Not sure what Birthday Palooza is?  If so, you are totally missing out on a lot of fun.  Lucia is a book blogger and every summer, around her birthday, she has a Birthday Palooza, which features a whole bunch of authors who are sponsoring giveaways and talking about birthdays.  This year it runs from July 31 to August 13.  I’ll be there on Saturday, August 6th, so mark your calendars and swing on by to visit.  You will definitely have a good time and who knows?  You might just win a book!  Happy Birthday Lucia!!!  (Click on “Birthday Palooza” picture to visit site.) 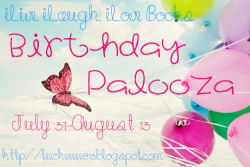 Also, I just want to remind everyone to get in their entries for my -Be My Star contest.  You could win a $100 gift card to any bookstore, and advanced reading copies of Awake at Dawn and Taken at Dusk.  So make sure you enter!!!