One of the first things Kylie notices about Derek is his green eyes, eyes so like her ex-boyfriend Trey’s, but unlike Trey’s, they are flecked with gold. Still, it’s the similarity that first draws her to Derek—and also makes her want keep as far away from him as possible. But whenever her eyes meet Derek’s, she can’t help the flutter in the pit of her stomach.

Lucas has blue eyes, eyes with a wildness, and it’s no wonder since he’s a werewolf. But when he looks at Kylie, there is a hunger too, and it’s got nothing to do with food. And when he kissed her, well, it made her want to be the one to satisfy his hunger.

Kylie wants to find out what she is, but she also need to figure out who she needs—and wants. So what is Kylie?

It has been said that the eyes are the windows of the soul. If that’s the case, then what does that say about shape shifter Perry? Practically every time Kylie looks at him, his eyes are a different color. Sometimes they’re gold, sometimes brown, and sometimes even black. It’s taken a while for Kylie to get used to Perry’s changing eye color, but she may never get used to him changing into animals. It’s a good thing Miranda doesn’t seem to mind…. 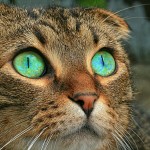 So, what is it about eye color? Are you attracted to someone because of their eye color, or is it more the shape of their eyes? Maybe it’s how they look at you that make you feel like the most beautiful person in the world. Who do you think has beautiful eyes? Whose eyes make your stomach flutter?

Gosh, I received so many funny captions for last week’s photo caption contest! It was a difficult decision, but I finally selected the winners.

Nika Raminez  2) “My dear chap, you’ve startled me! My cat knickers are all in a twist, I’m afraid.”

Now you need to e-mail your snail mail address to cc(at)cchunterbooks.com so I can send you your free copy of Awake at Dawn. You have 24 hours to claim your prize.