Recently, my son and hubby went to a junkyard to look at an old car, a Falcon Ranchero, they wanted to restore. I got the call about an hour later.

“We bought the car,” Hubby said.

“Good,” I lied. I mean, they really don’t need another car to work on. Isn’t two fixer-uppers enough?

“There’s something else I want to bring home,” Hubby said.

“Not another car, baby. We don’t have enough room.”

“You’re joking, right.” Really, I thought he was joking.

“No,” he answered in his dead serious tone.

The absurdity of this rolled over me like a dump truck. “You want to bring home a junkyard dog?”

Junkyard dog and sweet don’t belong in the same sentence. “No,” I repeated.

“She needs a home.” I could almost hear his heart breaking over the line and when I didn’t say anything, he added, “She needs someone to save her.”

Dang, that man always knows how to pull on my heartstrings, but a junkyard dog?

“Do you really want this dog?” I asked him.

“Is she housebroken?” I asked.

“I don’t think she’s ever been inside a house.”

“Does she have fleas and ticks?”

“Of course, she does. She’s a junkyard dog.”

“Are you really serious?” I asked.

I reminded him what they say about nothing being free. “She could cost as much as a couple of hundred dollars to take her to the vet.” I thought that would change his mind.

I was wrong, both about how much it would cost and about it changing his mind. So I threw in the towel. I mean, seriously, what were my choices? 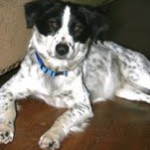 A couple of hours later, son and hubby pulled up with this free junkyard dog. Of course, that was after they stopped at Whataburger and got three meal deals. One for the dog.

“You get to name her,” hubby said. And believe me in this household that’s an honor. They never let me name an animal.

I petted her, cautiously. She accepted my hand guardedly. She was covered in fleas and ticks. But he was right. She was sweet and soft as silk. And unlike any junkyard dog I’ve ever known, she’s completely meek and docile. I took one look at her and named her Lady.

Hubby and son bathed her and took her to the vet. An hour later, we had good news and bad news. She’s only seven to eight months old and doesn’t have mange or heartworms. That’s it for the good news. On the other hand, she was severely anemic, severely malnourished, has all sorts of worms, and had kennel cough.

And oh yeah, she’s no lady.  I don’t mean she’s a boy. I mean, she’d been playing with the boys. Yup, she was pregnant. However, the vet didn’t think she was healthy enough to carry the babies. As a matter of fact, the vet said she didn’t think she would have survived much longer. So after another few swipes of our American Express, we had ourselves a free, $500, spayed junkyard dog. 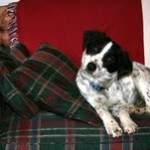 She’s adapting to her new lifestyle. At first, she ate food whole, chewing was optional—I mean what if someone decided to take it away from her? She now chews her food, enjoys her memory foam bed at night, and thinks sofas are much more comfortable that my hardwood floors. She much prefers gnawing on shoes or a pair of jeans to the sticks that she used to find outside. She finds it much more productive to steal the family pack of 96% ground round set out on the counter than to raid garbage-cans. (I still don’t know how she got on the counter, or how she ate all of it so quickly.) She decided the leftover grilled chicken on the table must have been hers. Why else would we have left it unattended for ONE minute? She’s certain that the cat food set out on the windowsill is hers, and not the kitties’. After one week, Lady has gained five pounds and hasn’t had one potty accident inside.

And the kitties? Well, she must have a little pointer dog in her, because she sees a feline, goes completely still, quietly raises and folds up one paw. Her tail goes straight and she stares at the varmint.

When we don’t do anything, she then looks at us as if to say. “I found it, now you shoot it. Hey, I did my job. You do yours.” Yeah, she’s still adapting, with a few scratches on her nose, to living with the felines.

But as she hangs out at her rescuer’s side, keeping him company as he works on his car, I have to admit, she’s the best five-hundred dollars my hubby has ever spent. She needed us; but in truth, we needed her, too.

So what about you guys? Have you ever taken in a stray?