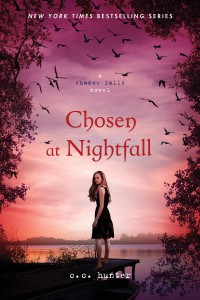 Wow! I was stunned by all your answers on last week’s blog. I have to tell you, a lot of you are going to get your wishes and some of you predicted what’s going to happen in Chosen at Nightfall—well, almost anyway. And no, I won’t tell you which of the ninety comments are closest to what will actually happen. But I suppose it’s time for me to start giving you a few clues.

Oh, and I have some other news that I’m dying to tell you, but I can’t… I know it’s mean to tease you, but seriously, this is some great news and I know you guys are going to be thrilled. (And no, it’s not about the TV series or movie. I’m still waiting and could be waiting for months to hear about that.) Anyway, I hope to be able to share my good news with you on next week’s blog. And I’ll also be giving you a few more clues about what’s going to happen to Kylie in her last book. So make sure you guys come back to read the blogs. And if you haven’t preordered Chosen at Nightfall, do so now. Here’s hoping these clues will get you all excited and dying to get your hands on my next book.

Also, the video for Chosen at Nightfall is just about done and it’s so cool! I’ll be posting that soon, too.

In Chosen at Nightfall Kylie. . .

And in other news, if you live in the Houston area, I will be having a couple of signing soon. As soon as I have the details, I’ll be posting the dates, times and places on my events page and my Facebook pages (CC Hunter Books and Shadow Falls Series), so make sure you keep checking.

The four winners of the Shadow Falls posters from last week’s giveaway are Monica Coburn, Bratty Grrl, Cathy Phung and Rachel Isdale. Congratulations! You have until February 5, 2013 email me at cc@cchunterbooks.com with your mailing address.

36 thoughts on “Clues and Teasers!”