Most of you know I usually post a new blog every Tuesday. So why am I posting a new blog on Friday? Because this news is so big, it can’t wait till Tuesday!

First, I’d like to thank everyone that made the Montgomery County Book Festival such a success. I met so many wonderful people, and I had so much fun teaching my writing class. And a big thanks to everyone that came out to see me. I have the best fans! Next Tuesday, I will be posting some more teasers for Chosen at Nightfall, so be sure to check back next week.

Now I realize a week isn’t a huge change, but maybe you can get a head start. On April 2, I’m releasing a novella called Saved at Sunrise. Many of you have begged me for details on what happened between Della and Steve on their F.R.U. mission, and now you will find out. The story is from Della’s point of view and she’s telling all! And let me tell you the sparks are flying between this vampire and shape-shifter. Saved at Sunrise, approximately 100 pages long,—so this isn’t just a short story— will only be released as an ebook and is available for preorder starting today for $1.99 at Amazon and Barnes and Noble. How is that a head start on Chosen at Nightfall? Well you see, as an added bonus, Saved at Sunrise also contains an excerpt which includes chapters 1 and 2 of Chosen at Nightfall!

So would you guys like some more good news?  I told you I had some great news!!  How many of you have emailed me and asked me not to end the Shadow Falls series?  Well, how about if we don’t end it?  Would that be okay with you?  What if we slip into Della’s point of view and keep the Shadow Fall series going?  I mean, Della still has a lot of stuff to work out.  There are her parents, not mention there’s her beginning romance with Steve.  And there’s going to be someone else vying for her attention.  Who do you think it could be? Hmm….

And because I really enjoyed writing Della’s Saved at Sunrise story (I mean, it has action, suspense, humor and lots of passion), I had a video done for it. So, as a special treat and to whet your appetite, here’s the video for Saved at Sunrise. 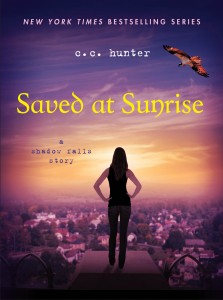 Nestled deep in the woods, Shadow Falls is a secret camp where teens with supernatural powers learn to harness their abilities and live in the normal world. But Shadow Falls is facing a problem that could finally expose them to the rest of the world. Humans are showing up dead and rogue vampires may be to blame.

Camp resident Della Tsang, who’s still coming into her own vampire powers, is assigned to help find those responsible. If she succeeds, maybe she’ll even land her dream job: working for the F.R.U., the enforcers of the supernatural world. But when she sees her new partner is the hunky shapeshifter, things get complicated. Steve, too gorgeous to be trusted and capable of seeing through her tough-as-nails exterior, gets under this vampire’s skin. Only hours into the mission, Della realizes rogue vampires aren’t the only threat she’s facing. If she’s ever going to complete her assignment, she’ll need his help…but learning to trust him will be her hardest challenge yet.

So many of you spotted the changed date for the release of Chosen at Nightfall! I wish I could give everyone a poster, but I had to select four random names with the correct answers. So the winners are Leanna Ye, Sophia, Savannah King and Madeline Corre . Winners, please email your address to cc@cchunterbooks.com so I can mail you your Shadow Falls poster.