“I found out two things today: One, I think I’m dying. And two, my brother is a perv.”

So begins the diary of Jenna Samuels, who is having a very bad year. Her mother spends all day in bed. Dad vanished when she was nine. Her older brother, Casey, tries to hold together what’s left of the family by working two after-school jobs—difficult, as he’s stoned all the time. To make matters worse, Jenna is sick. Really sick. When she collapses one day, Casey tries to race her to the hospital in their beat-up Prius and crashes instead.

Jenna wakes up in the ER to find Casey beside her, looking pretty good. Better than ever, in fact. Downright…angelic. The flab and zits? Gone. Before long, Jenna figures out that her brother didn’t survive the accident at all, and she isn’t just sick; she’s being poisoned. Casey has been sent back to help Jenna find out who’s got it out for her, a mystery that leads to more questions about their mother’s depression and their father’s disappearance.

I had a chance to ask Joy some questions about TSDL and the series. Here’s what she had to say:

CC: Where did the inspiration for writing The Sweet Dead Life come from?

Joy: My editor – with whom I’d worked briefly in the past—contacted me and basically he said, “I’m starting a new teen mystery/thriller imprint at Soho Press. I have an idea about this stoner dude who comes back from a fatal car accident as his dying sister’s guardian angel and they solve this vast mystery. Do you think you’d be interested in writing that book?” That was it – this one intriguing sentence idea. And of course I said yes! And then I asked if I could set the book in Texas, because that’s how the story was coming to me. After which, he said yes, and I sent him some sample pages and Soho Press/Random House was pleased and we went on from there. Beyond that, I found myself LOVING the idea of this flawed but angel-at-heart boy becoming a totally unlikely hero. And his sister Jenna came flowing out with such a loud and distinctive voice that the team at Soho jokes that they can all channel her when writing promo copy or editing! It’s something I’m so proud of , Jenna’s narrative voice. And I’m thrilled people are noticing, like this Booklist review: “There’s a whole lot going on here: poisonings, blackmail, sibling relationships, romance, and abandonment, in addition to angels, but the unifying thread is Jenna’s clever, bitter, self-aware, and loving voice…The small-town Texas setting is delightfully detailed, but not parochial. Preble’s lively descriptions and unusually well-drawn, caring sibling relationship (a topic not usually explored in teen fiction) are especially noteworthy.” ~Booklist

CC: The Sweet Dead Life is set in Texas. Tell us about that.

Joy: Like I said, that’s how the story came to me, and not just because I live here! But beyond that, I found myself thinking how great it would be to create this new series that was both a sibling story as well as a battle of good vs evil story and do it against the backdrop of Texas high school football and bbq restaurants and verging on rural suburban Houston. It’s a very specific subset of Texas: the northern Houston suburbs—in which both you and I live. But for those who don’t, think: Wal-Marts and Olive Gardens and huge mansions juxtaposed against double-wide trailers and tough East Texas folks drinking sweet tea and going to Friday night football and possibly less surprised than the rest of the country if an angel was walking amongst them. Not that they know… Texas seemed the perfect place. Houston even more so. Although they do road trip it to Austin now and then…

CC: TSDL is Casey’s story to a large degree, since he’s the one who comes back as an angel. So could you talk about choosing his younger sister Jenna as the narrator?

Joy: Again, the narrative choice was originally my editor’s. But I did agree. I love the juxtaposition of Jenna’s innocence—albeit with a feisty, sarcastic voice—with Casey’s less than reputable habits and subsequent angel journey. Having Jenna narrate heightens the reader’s sense of what is happening to this family and as the series continues with next year’s The A Word, also allows you to see the larger battle of good and evil through a fresh set of eyes as well.

CC: Speaking of Casey, this is a very different kind of angel book. In what ways do you see it putting a different twist on the genre?

Joy: Well, from the beginning, we knew this book would be different and after that, we embraced its differences. Basically, Casey begins the story as more too-many-late night-taco-run flabby middle than tatted up/fallen angel hottie. While obviously paranormal, the novel grounds itself in the real life suburbs. And what seems to please a lot of early reviewers is that it is a mystery/comedy not a romance. Which is not to say that there is no romance in the book—there is (and in fact Jenna’s first romance ever plays a large role in the upcoming The A Word next year). But the sibling story and the family mystery play a much more central role. All of which readers seem to be loving. Yay!

CC: What’s next for Joy Preble?

Joy: Well, right now I’m finishing revisions and edits on The A Word. The first 50 pages will be appearing in the Soho Spring 2014 sampler that will make the rounds of the trade shows this summer. I am really excited about continuing Jenna and Casey’s story! And there are other projects in the works that I hope to be able to tell you about soon!

Want to find out more about Joy’s books? Head over to joypreble.com or follow her on Twitter at @joypreble. 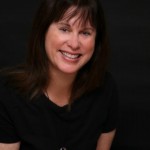 Joy Preble is the author of the popular and highly acclaimed Dreaming Anastasia series. A former English teacher, Joy grew up in Chicago and is a graduate of Northwestern University. She is now a full time writer and lives with her family in Texas, where she has learned to say “y’all” without any hint of irony. A tireless advocate for literacy and great books, she is at the center of the all-important Texas YA scene.

This week I’m giving away one copy of Joy’s book The Sweet Dead Life to one lucky reader who leaves a comment. Remember, if you are reading this on Goodreads, you need to leave your comment on my website blog in order to win. Also, I have to limit this giveaway to U.S. residents.