I say  . . . heck yes.  The reason I say this is because, originally, Shadow Falls wasn’t the series title.  As a matter of fact, it didn’t get changed until after the first book was all finished.  Only a few weeks before Born at Midnight was to go to print, I got a call from my editor.  She said,  “Well, at the last minute, marketing decided that Bone Creek Camp sounded too much like a western.”  (Yes that was my original series title.)  Anyway, she said that marketing suggested that we change it to, Shadow Falls.

I liked it and so did my editor, but then she said,  “There’s only one problem.  There’s not a falls at the camp.  Do you think you could go back in and just add a water fall?”

I was a tad panicked.  I mean, I had already finished the book and felt that if the series title was going to be Shadow Falls, then the dad-blasted water fall better be important.  Problems, problems!  Anyway, I decided that instead of actually writing the falls into the first book, I would simply hint at the fact that there was a water fall.  I’ll bet some of you wondered why Kylie didn’t get to the falls in the first book. Well, now you know, it’s because there wasn’t a water fall until I went in and added her hearing it, added her thinking about it.  Added her feeling lured to the falls.

I have to tell you, I loved adding the little bit of mystery about the falls in Born at Midnight.  And look how important the falls became to the story in the rest of the books.  So just a change in the series title added a whole new element.  Now I’m sure if we’d kept the title, “Bone Creek Camp” the bones would have probably played a bigger part in the overall arc of the story, but I seriously think I like the falls better.

So why am I talking about titles?  And just what is my big news?  Well, we finally got the title for Della’s series as well as the title for the first two books.  Are you ready?

I really love the titles and the addition of “After Dark,” to the series title.  It has a little spooky connotation to it, but it also adds a little sexy essence.  And with the two titles, Reborn and Eternal, my mind is already moving a mile a minute coming up with plot twists that epitomizes those titles. 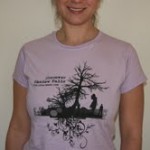 Okay, well, I’m off to write Reborn.  Have a great week, guys, and today, I’ll give another Shadow Falls t-shirt away.  So make sure you post a comment and tell me about the titles of other book series that you love.

And last week’s winner of a Shadow Falls t-shirt is Josephine. Please email your mailing address and t-shirt size to cc@cchunterbooks.com. Congratulations!