Reborn will be released May 20. I know many of you have said you cannot wait, but in publishing, that’s not far away. There is a lot to be done between now and then. One of the things I am doing is looking for a theme song for Della. I have been searching the Internet, but I haven’t quite found the right song. I found Kylie’s theme song easily, or more like it found me. I had been looking everywhere, then I was driving down the road, listening to the radio and Natasha Bedingfield’s song Unwritten came on. It hit me like a ton of bricks. That was the perfect song for Kylie!

But now I need a song for Della and Reborn. I did find several that I thought might fit, so I’m posting them here. Tell me which one you like or suggest one of your own.

Cheryl Crowe’s The First Cut is the Deepest:

This week I’m giving away three Shadow Falls posters to three people who leave comments. So let me know if you like one of these songs or suggest one of your own. (Sorry, this giveaway is only open to U.S. residents. And as always, if you are reading this on Goodreads, you must post your comment on my website blog for a chance to win.)

Well, this last weekend I went to the Montgomery County Book Festival. And I had a blast.  Got to meet and chat with a lot of Shadow Falls fans.  And I think I snagged a few new readers, too.  I gave some of them a few sneak peeks into what Della is up to.

And oh, yes, she’s up to her eyebrows in trouble.  You know trouble is like her middle name.  Not that you can really blame her.  Della’s going through a lot.   I can’t give away too much, but I’ll give you just a few tiny tidbits, a few sneak peeks of what’s going on at Shadow Falls. 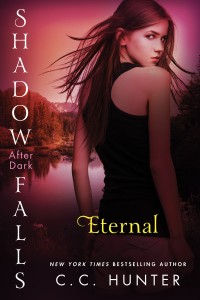 Join me and over 45 other authors this Saturday, February 22 at Katy Budget Books’ Houston Author Bash. This event is FREE, but it is a ticketed event, so be sure to follow the link and register. There are even a limited number of VIP tickets, which acts like a fast pass and lets you skip to the front of the long lines,  for only $10. Don’t miss this event at the Harmony Science Academy of West Houston in Katy, TX. 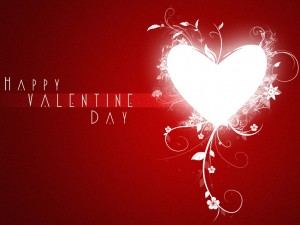 This Friday is Valentine’s Day. For many, it’s a very special day, for others, not so much. In fact, a recent poll said Valentine’s Day is the most stressful day of the year for many men. They feel they are under a lot of pressure to buy the right gift.  I feel their pain. We women can be hard to read at times. Even I sometimes forget that hubby isn’t a mind reader, but he usually comes through.

Now imagine being Della’s boyfriend. Talk about  stress! For so long Della had watched her two best friends with their boyfriends, and now it’s her turn. Even if she doesn’t want to admit she’s kind of in a relationship with Steve, I think she’d be hurt if he didn’t give her anything for Valentine’s Day. Della swears she’s not a girly girl.  She doesn’t need chocolate or flowers, but down deep she’s like everyone.  She wants to know some guy is crazy about her. That she’s special enough that he would go out of his way and get her something.  What do you think the perfect gift for Della would be?   Something that wouldn’t get Steve killed?

What would the perfect gift for you be?

There were so many great comments last week, it was hard to choose a winner. But the winner of the Shadow Falls: After Dark giveaway is Jo-Ann Stephens. Jo-Ann, please email me at cc@cchunterbooks.com with your mailing address.

Let’s talk reading habits.  When do you read? How long do you read?  Are you a chapter at a time reader?  Or the type that gobbles up a book in one sitting?  I would love to be gobbler, but writing makes me a chapter at time reader, unless, I stumble across a book that just grabs me by the neck and won’t turn me loose. And I have to admit, I have stayed up all night reading. Have you ever stayed up way past your bedtime reading?  (Actually, I know some of you have because you’ve told me in emails.) So, where do you like to read?  I usually read in bed.  Or sometimes I read on the sofa.  I’m getting a new sofa for my new office and I want a comfy one so I can take breaks and read for a bit. You see when I’m writing, I don’t get a lot of time to read, so maybe I can work more in if I can stretch out on my comfy sofa and read for a few minutes during breaks.  However, almost every night I do pick up a book and read for a bit until I can’t keep my eyes open anymore.  And whenever I’m on vacation, my goal is always to read a book. 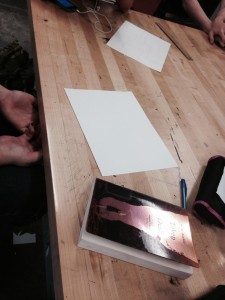 Do you read at work? During your lunch break or do you sneak in reading when you should be working? Shhh…I won’t tell! We’ve all done it.

Do you read in school? And here, I don’t mean English assigned reading or math books. I’m talking about outside reading. Do you bring books to school to read during your breaks? During class? Well, my daughter is a teacher and lately she’s caught several students reading in class. She always gets on them, but the other day, she took this photo of what her student was reading: Taken at Dusk. 🙂 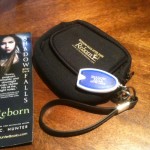 This week I’m giving away another swag packet to someone who leaves a comment.  (Unfortunately, this giveaway is limited to U.S. residents. Sorry! And if you are reading this on Goodreads, remember, you have to leave your comment on my blog in order to win.)