My friend and talented author, S.C. Montgomery, has a new YA novel out called Two Blue Lines, and I’m really excited about it. Two Blue Lines is a realistic story of first love and all that goes with it, and can go wrong with it. I stayed up way too late finishing this book. 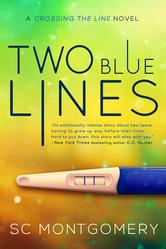 His fear . . . Her secrets . . . Their choice. What if the only girl you’ve ever loved lied to you? Lied to everyone? Those two blue lines changed everything for Reed Young and Melissa Summers. In more ways than one. And now, he must decide for himself . . . Man up or walk away? SC Montgomery has created an emotional tale of first love, difficult choices, and impossible secrets. A deliciously angsty debut you need to read for yourself.

***Reader Warning*** Two Blue Lines is the emotional, honest story of two teenagers whose lives are about to change forever. While not glorified, or portrayed in detail, there are themes of sexual assault and teen pregnancy, as well as allusions to teenage drinking and some foul language. It is all meant to create an honest, relevant novel, but please be aware and read only if you’re comfortable. ***Note, while this novel is a standalone that deals with mature subject matter, it may be helpful to read Lines in the Sand first to understand what makes Reed Young tick and hear about the summer that changed his life forever. Well, before this one.

S.C. agreed to answer a few questions for us.

1. In a couple of sentences tell us what your book is really about?

Two Blue Lines is a coming-of-age story about two teenagers, Reed and Melissa, who are dealing with the unthinkable…an unplanned pregnancy. It is their love story, but it’s also about family, secrets, and the pain of growing up.

2. What is your favorite scene in the book?

I have so many that I love for different reasons, especially the ones where you get glimpses into their relationship and see why and how they love each other.  But, I guess if I had to choose one, I’d pick the opening.  It sets the stage for the emotional story to come and it came to me in such a vivid way when I was trying to imagine Reed’s story after Lines in the Sand, the series prequel, which takes place during the summer he turns 13. Both important summers that force him to grow up, and fast.

3. What scene was the hardest to write and why?

I think the scenes with Reed’s father. In Lines in the Sand, his relationship with his mom is the centerpiece. But, as he’s grown into a young man, his relationship with his dad is so very important to him. Due to some family secrets and Reed’s mistake, it all becomes strained and painful. That emotion wasn’t always pleasant to delve into, but it was necessary and I think, in the end, made the story more relevant.

4. What are you working on next?

This is the first in a three novel series.  Two Blue Lines is Book I, and next I’m working on Book II, Blurred Lines. This is Reed’s best friend, Jonah’s story. And if I thought Reed and Melissa’s story was emotional, Jonah and Autumn’s is proving to be even more so. And, after that, I’ll get started on the third and final installment, Between the Lines, which will be Melissa’s brother Chris’s story…and believe me, he has some secrets of his own.

5. How did you get started writing YA?

Well, I’ve been writing adult contemporary romance for several years now under my other pen name, Shauna Allen. In one of those books, the heroine had a teenage son, which I loosely based on my own son. I found I really enjoyed giving him a voice and seeing his perspective on things. Plus, my family and friends all told me how much they enjoyed him and that I could do YA. I didn’t think much of it until my mom became very ill and I got the idea to write a short story just for her, no pressure. I created a story I knew she’d love about a couple of boys on an emotional journey that had a hint of a mini-mystery to it and gave it to her for Christmas. Long story, short, she loved it (and C.C. loved it, too, LOL!) and gave me her blessing to share it with the world. So, Lines in the Sand was born. And, once that YA bug bit and I fell in love with those characters, I knew I had to carry it on as a series and see where it goes. And, I have to tell you, I’m loving the ride!

Thanks, S.C., for joining us today. 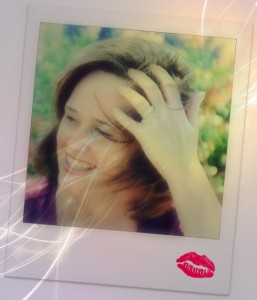 S.C. Montgomery is a self-proclaimed nerd and readaholic. She has dabbled in telling stories since she was very young by letting her imagination play out with her Barbie dolls and her bestie many a weekend. She also writes contemporary adult romance under the pen name Shauna Allen, and it was in one of those novels that the YA bug bit when she wrote a teenager loosely based on her own son. Her first story, Lines in the Sand, was penned as a gift to her mother, but was published with her blessing, and has just taken off from there.

S.C. is married with three teenagers of her own, who give her plenty of inspiration and advice, and are a constant source of laughter and new terminology.  Besides writing, she loves reading, movies, signing and dancing, reality shows and going to the beach.

You can buy Two Blue Lines at Amazon, Barnes & Noble,  and Kobo.

You can find out more about S.C. on her website: http://www.scmontgomery.com/.