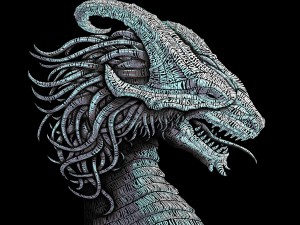 There’s a monster hiding under my desk.  He lurks there, waiting for the right moment to attack. He’s an ugly little bastard, too.  I have a lot of names for him, but for the sake of not overusing profanity in this blog, I’ll call him by his real name, Self-Doubt.

Most of you might think that after two decades in the business, after hitting list that I only dreamed about hitting, I’d have managed to kill the gremlin.  But you’d be wrong.  That sneaky little devil won’t die.  He keeps popping back up.

I think self doubt is something most writers face throughout their careers.  And by careers, I don’t mean from the point that you become a published author, I mean, from the point you start writing.  I think the inability to fight the gremlin is one of the biggest things that prevent a writer from becoming published.  And it’s probably one of the reasons published writers stop writing.  That’s right, this monster doesn’t care what you’ve accomplished.  All he wants is a big bite out of your confidence.

He’ll tell you that whatever you’ve got on that computer screen is crap.  That you just need to delete it.

He’ll convince you that no matter how good of an idea you may have, it’s probably already been done.

He’ll whisper in your ear that you’re wasting your time, that cleaning out your grout in your kitchen tile with a toothbrush is much more important.  Sometimes he possesses your family and friends and they’ll say things like, “How long are you going to put yourself though all this pain before you find something else to do with your time?”  He’ll stare you right in the eyes and tell you that your dreams are silly and you’ll never reach them.  He’ll make you believe that the one negative review out of twenty good ones is the one you should listen to.  If you let him, he not only can slow you down, he’ll rob you of the joy and passion you feel for writing.

Now, that gremlin is always close by, nipping at your toes, giving you moments of doubt.  I think that’s somewhat normal.  But let that creature scramble up your leg, hang out in your lap, or even worse, let him climb up on your shoulder, where you can listen to him all day long, and you’ll soon be playing Russian Roulette with your passion for writing.  Because writing with a self-doubt gremlin sitting on your shoulder is about as easy as brushing your teeth with a brownie in your mouth.

So how do we slay the gremlin or at least keep him at bay?  Below are five tips for overcoming and preventing self-doubt from chewing on your sanity.

1.) Be Aware of Peer Pressure.

We preach this to our kids but so often we forget that the bad habits of the people we hang out with are as contagious as a stomach virus.  If you’re hanging out with negative people, people who have lost their ability to chase their dreams, you’re at risk of becoming just like them.  Find positive people who validate your dreams and work ethics to share your life and support your journey.

2.)  Ward off the message that you don’t know what you’re doing by continually growing at a writer. Read how-to books, take classes, attend those writer meetings and listen to what other writers offer as advice.

3.)  Mentor someone else. Nothing can inspire you more than helping and encouraging another person.  Telling others that they have to believe in themselves is a sure fire way or rekindling your own self-confidence.  It also creates karma.

Writing isn’t for wimps.  Chances are, you’ll face those gremlins, not once but many times, so just be armed with good friends, knowledge, Karma, a sense of adventure, and perseverance.  And never, ever lose your sense of humor.  And now that I’ve shared with you my tips for slaying gremlins, I’d like to hear some of yours.  How do you tackle self doubt?

11 thoughts on “How to Slay a Gremlin”