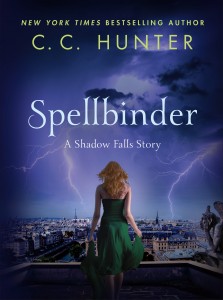 It won’t be long until Miranda’s novella, Spellbinder, will be out. That’s right, June 30th, you’ll be able to read all about Miranda’s Paris adventure. Oh yeah, Perry and Steve are both there, too. Not to mention Kylie and Della. Then there’s the person trying to kill Miranda and her fellow contestants in the magic competition.

What Miranda doesn’t expect is for her investigation to unleash shocking revelations…about herself, her family, and her arch enemy. Now Miranda must step up and show everyone that she’s a witch to be reckoned with….before it’s too late.

Spellbinder is available for pre-order at Amazon, Barnes & Noble and iBooks.

So, be sure to pre-order Spellbinder, tell all you friends to do the same, and share Spellbinder’s cover on your Facebook page.

And remember when magic, romance and family secrets collide, the result is spellbinding!