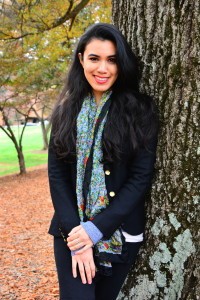 I have a real treat for you this week! I interviewed new YA writing sensation, Roshani Chokshi. Roshani comes from a small town in Georgia where she collected a Southern accent, but does not use it unless under duress. She grew up in a blue house with a perpetually napping bear-dog. At Emory University, she dabbled with journalism, attended some classes in pajamas, forgot to buy winter boots and majored in 14th century British literature. She spent a year after graduation working and traveling and writing. After that, she started law school at the University of Georgia where she’s learning a new kind of storytelling.

Not by a longshot! I think the first ms I completed was thinly-veiled TWILIGHT fanfic that I immediately tried querying in highschool.

The idea for The Star-Touched Queen came from my deep love of fairytales. Growing up, my siblings and I connected to our heritage through world mythology since we didn’t speak our parents’ native tongues. I was really inspired by how Hindu and Filipino myths resembled Western stories and vice versa. To me, that’s because stories are the only global treasure and they’re so often recognizable across cultural spectrums because we are all telling the same tale.

Always! Since I was 7 and I used to write stories and staple them together and hand them out to my family members. If I had my choice, I would’ve picked sorceress but writing is as close as it comes to magic.

All three require such different mindsets. I always find it easier to write something else when I’m on deadline or under contract for another haha. Poetry is my first love though. I love rich language and manipulating language as its own lens. Even when I’m writing a book or a short story, I try to think about it in poem-form first.

Kamala. The flesh-eating demon horse. I gave her the personality and sense of humor of me and one of my best friends.

Right now, I’m working on a historical fantasy set in the 1890s! 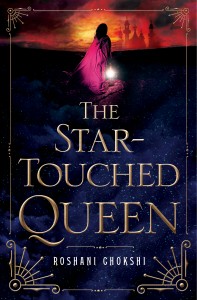 Fate and fortune. Power and passion. What does it take to be the queen of a kingdom when you’re only seventeen?

Maya is cursed. With a horoscope that promises a marriage of Death and Destruction, she has earned only the scorn and fear of her father’s kingdom. Content to follow more scholarly pursuits, her whole world is torn apart when her father, the Raja, arranges a wedding of political convenience to quell outside rebellions. Soon Maya becomes the queen of Akaran and wife of Amar. Neither roles are what she expected: As Akaran’s queen, she finds her voice and power. As Amar’s wife, she finds something else entirely: Compassion. Protection. Desire…

But Akaran has its own secrets — thousands of locked doors, gardens of glass, and a tree that bears memories instead of fruit. Soon, Maya suspects her life is in danger. Yet who, besides her husband, can she trust? With the fate of the human and Otherworldly realms hanging in the balance, Maya must unravel an ancient mystery that spans reincarnated lives to save those she loves the most. . .including herself.

A lush and vivid story that is steeped in Indian folklore and mythology. The Star-touched Queen is a novel that no reader will soon forget.

You can order The Star Touched Queen from Amazon, Barnes & Noble, Kobo and iBooks.

This week, I’m giving away a copy of The Star Touched Queen to two lucky people who leave a comment below. (Sorry, but this giveaway is limited to U.S. residents only. If you are reading this on Goodreads, you’ll need to go to my actual website blog to enter the giveaway.)

The winner of a bag of Midnight Hour swag is Jizeru Montesu. Congratulations! Please email your postal address to cc@cchunterbooks.com.