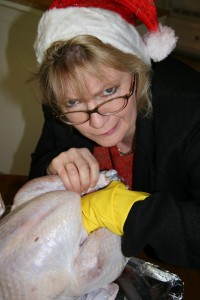 I did it.  On Friday night, I went shopping for my bird.  I got a twenty pounder this year.  Chubby little sucker.  While I’m not yet in the mood to perform the bi-annual holiday colonoscopy—where I stick my hand up the bird’s backside to pull out the giblets—I’m working up the courage.

In the Craig house, I’m the main cook.   Someone may bring a dish, but for the most part, this is my party and I’m running the show. This is not my choice, or my need to be top chef, it’s just happenstance when a person doesn’t hate cooking and doesn’t suck at it.

And I really don’t hate it.  Preparing Thanksgiving dinner is like a form of meditation for me.  I go in, find my Zen—well, I don’t find it until after I perform the colonoscopy—then it’s like I move from snapping beans to peeling potatoes to preparing the two P pies—pecan and pumpkin—in a yoga state of mind.

Now, I’m not going to brag that my Thanksgiving dinner is better than Martha’s, but I swear to you I’ve never sent anyone to the hospital, and I’ve gotten leftover requestseven from people who didn’t attend the dinner.  Oh, and I got a real compliment from a stuffing-loving Yankee friend of mine who said, “I still prefer my mama’s bread stuffing with oysters, but that was the best cornbread dressing I’ve ever eaten.”

And yes, I’m a cornbread-dressing gal.  I’m from Alabama and if anyone had tried to sneak an oyster in my grandmother’s dressing, she’d have brought out her Southern can of whoop ass.

That said, I respect a good stuffing, minus oysters, of course.  Frankly, every family has their own gotta-have Thanksgiving specialty dishes.  Some people don’t think you can ring the dinner bell unless they have a ham on their table keeping the turkey company.  But the way I see it is, after you fill up with turkey, dressing, and the side-dishes, you don’t have room for ham.  The only speck of pork on my holiday table is the bacon I use to season my fresh green beans.

Another thing that doesn’t appear on my table, or in my gravy, is anything I pull out of a turkey’s butt.  I know, I know, giblet gravy is almost a tradition—even a southern one.  But I’m sorry, I know where they came from, and in the Craig house they go straight from tail end to the trash.  I make gravy, darn good gravy, using the drippings from my turkey.

We’re not a yam or a sweet potato bunch people either.  Although, I admit I recall fondly my mama’s sweet potato crunch casserole that was more like pie with oven crispy pecans, corn flakes and coconut on top.  Yum.  But hubby’s not a fan, and growing up neither were my kids, so it got knocked off the tradition list.  Neither are we into gelatin salads or desserts.  Though I’ve had a few of both that are quite tasty.

Our dinner consists of turkey—not fried, but baked—dressing, southern mashed potatoes with lots of real butter, giblet free gravy, green beans, peas, rolls—to soak up the gravy—and pies and cookies.  Oh, I can’t forget the cranberry sauce.  Shamefully, I don’t make it myself.  I use the can.  As a matter of fact, we have a silly tradition—in honor of my daughter—of how we serve that cranberry sauce.

The first time we left my daughter at home for the weekend she was a teenager, and unaccustomed to feeding her own dog.  Well, let’s just say she didn’t excel at it.  When we came home, in the dog’s bowl, was canned dog food in a perfect cylinder-shaped form. Poor Bosco didn’t know what it was, and wasn’t eating anything in that shape.  So hubby always opens the can of cranberry sauce and serves it cylinder style.And every year we get a laugh out of it.

And that is the best part of Thanksgiving. Not the cylinder-shaped cranberry sauce, but sitting around the table, laughing, loving and reminiscing while surrounded by family and friends. It almost makes sticking my hand up a turkey’s backside worth it.

Oh, and the next best thing is I don’t have to clean up. Since I do the cooking that job goes to those who didn’t. 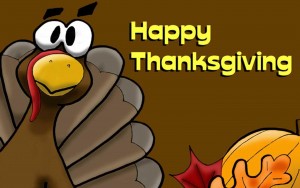 So what’s it like at your house on Thanksgiving?  What are the traditional side dishes that show up at your table?  Do you do the cooking?  Do you put oysters in your dressing or stuffing? I’m giving away a $10 amazon card to one person who shares something about their Thanksgiving.  Make sure you come back next Tuesday to see if you won.

The winner from last week is Kristen. Congratulations, you’ve won an e-copy of Fighting Back. Email me at cc@cchunterbooks.com.