I sometimes get asked crazy questions.  And I’m going to post a series of blogs answering them.  Frankly, some of the answers are as crazy as the questions.  So here we go!

Are you a supernatural?

Well, as far as I know, I’m one hundred percent human.  I do not believe in vampires and such.  But witches . . . well, that’s another story.  If you look back at my family history, you might say I have a little witch in me.

When my great-grandmother was young, back in the 1930’s, she was actually called to the hospital to “talk the burn” out of patients who had been burned.

When I was little, my grandmother would sometimes babysit me, I would go to her house and Granny (my great-grandmother), then in her late seventies, lived with her.  People would show up and I was told to stay in living room, but sometimes I would sneak out and see what they were doing that was so secret.  Granny would be reading people’s fortunes.  Using ashes and a coffee cup.  It was sort of scary, and I was totally intrigued.

While I don’t read people’s fortunes.  I do have this crazy kind of ESP.  For example, there was this one time that hubby and I were coming back from a weekend trip.  We were on some backwoods road.  I looked up and saw two planes.  There was something inside of me that said one of those planes was in trouble.  I glanced at my husband and asked, “Is there an airport anywhere around here?”

“I don’t know,” I told him.  I didn’t want to put words to what I was thinking. Sometimes those crazy feelings scared me.

Well, about twenty minutes later, we came to dead stop.  Traffic was backed up.  Hubby said it had to be a bad accident to have caused such a traffic jam out there in the country.

At the word accident, my heart dropped, and I muttered.  “I hope it’s not a plane crash.”

“Nothing,” I said and looked out the window.

“No, it’s not nothing,” he insisted. “Why would you think that?  You asked if there was an airport.  Why would you ask that?”

“I just . . . I had a feeling.”  I told him about seeing the two planes and thinking one of them was in trouble.

He knows about my crazy feelings.  While he isn’t a real believer, he’s also seen me be right enough times that he doesn’t completely doubt me either.  But that day, I think he thought I was a french fry short of a Happy Meal.

About ten minutes later we came upon the accident. There, on the side of the road, was a small downed plane covered by a big tarp.  There were no survivors.

I will never forget how he looked at me and said, “You scare me.”  I didn’t blame him.  I’d scared myself that day.

Now I don’t go around trying to predict the future. I’ve never read anyone’s fortune or “talked the burn” out of anyone.  I may go months without this crazy thing happening.  And most of the time, it’s not about big things like a plane crash, but about knowing the phone is going to ring.  Or that I should take a certain road because there’s going to be too much traffic.  I can’t explain it.  And to be honest, it still kind of scares me sometimes.

So, I don’t consider myself a supernatural, and I don’t believe in witches and such one hundred percent. But I do believe that some of us have this crazy thing called ESP or what I call “woo-woo.” I’m dyslexic, and I heard once that people with dyslexia have some uncanny intuitiveness.  And yes, that was sort of where the idea of Miranda’s book, Midnight Hour, came from.

And in my next book that I’ll be announcing soon, very soon, there’s a little of this kind of woo-woo.   Look for me to announce the book in the next month or so.

So what about you?  Have you ever experienced a little ESP or woo-woo?  Do you believe? 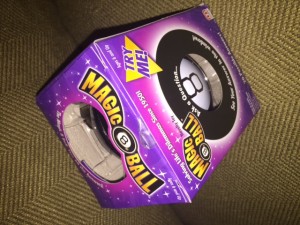 Today, because we’re talking about reading fortunes, I’ll give away a Crazy 8 ball to one person who leaves a message. (Sorry, but this giveaway is limited to U.S. residents only. If you’re reading this on Goodreads, you must go to my actual blog page to post your comment.)

And come back every Tuesday, I’ll be answering more crazy questions.

5 thoughts on “Supernaturals, Witches and ESP”