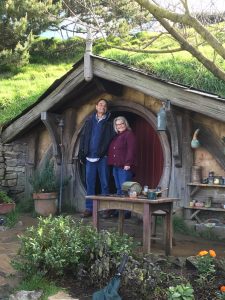 I’m still in New Zealand.  The RWNZ Conference was amazing, and I had the best time. I met so many wonderful people and made some forever friends. RWNZ interviewed me before I went over there, and I thought they asked me some interesting questions. So, I’m sharing it with you.

I keep the two writing personas in separate rooms and one doesn’t even know the other exists.  As for the second part of that question, who says I keep anything straight in my mind.  LOL.

As for having two different writing personas.  The hardest part of the juggling is feeding the two different dragons/genres. Making sure I put out books in a timely manner so the readers don’t forget me.  I try to do two books of each a year, but I don’t always accomplish that.

A lot of people assume that I use two different voices.  But I don’t really feel that I do.  Actually, when I was asked to write my Young Adult series, the editor made it clear that she didn’t want me to change my voice.  So as I started writing the Shadow Falls series, all I did was change the age of the characters and pull character traits from someone in my protagonist’s stage of life.  Because St. Martins also wanted it to be paranormal, I added magical elements.  All of my books contain a blend of heart, humor, mystery/suspense and a sexy tone.  Some books are stronger on heart than they are on humor, all of my books are sexy, but some are just more explicit than others.  Some plots focus more on the suspense elements. Each book, depending on character and targeted audience, will be heavier on one element more than the other.  I just sold an adult Romantic Suspense trilogy that will be more suspense than humor.

I’m definitely a one-book-at-a-time person.  I may be working on one and have to do the copy edits on the other, but for the most part when I’m in a book, I don’t jump to another.  I know a lot of writers who can do this, but I’m not one of them.

I totally disagree that humor kills the mood.  First, there have been studies to what women and men find most attractive about a mate.  The majority said a sense of humor.  Second, love is supposed to be fun.  Have you ever really noticed someone who is just falling in love? They go around day and night wearing that stupid grin.  Love makes us happy.  I believe it was Jennifer Crusie who said something like, you’d better write a character who you wouldn’t mind being locked in closet with for four or five days, because that’s what you are asking of your readers.  To stop their lives for however long it takes them to read your book and spend time alone with your story people.  Let me tell you, if I was locked in a closet with someone who was solemn, serious, and acted as if they had a stick up their rear, I’d go crazy.  Give me someone who can laugh, joke, and is fun to be around.

As for how humor enhances romance.  Laughter releases feel good hormones in our mind.  Falling in love releases even more hormones.  By writing humor and love in our books, we offer readers a double dose of an irresistible cocktail of fun hormones.

Oh, yeah, we can have all the naked tattooed guys, with tattoos where we didn’t even know men got tattoos.  You don’t need to be writing a romantic comedy to use humor in your books.  Humor should be part of real life just as it should be part of our fiction.  Think of Steel Magnolias or Fried Green Tomatoes.  I took the advice from my grandmother, “If you can laugh at it, you can live with it.”  I’ve given this advice to every character I’ve created.

Oh, that’s a hard question.  Part of me wants to say it’s the feeling I get every time I finish a book, because there’s nothing like that feeling. Another part of me hopes it’s one that hasn’t happened yet.  Don’t get me wrong, I’ve had some real proud moments: finishing and selling over 40 books, making the New York Times list, making RWA’s Honor Roll and being a RITA finalist.  That said, I’m a firm believer that if we ever stop trying to reach for our next big goal, if we stop learning or stop challenging ourselves, we shrivel up, get old, grumpy and sad.

It’s been proven that married women who read romance have more sex than those who don’t. It’s said that reading romance can rekindle our belief in love.  Romance novels show strong women standing up for what they want. They show heroines and heroes, most of whom have had bad relationships and who have overcome that pain, willing to give love another shot.  I don’t think I’ve read a romance in a long time that made it sound like all you needed was love.  In these novels there’s conflict, compromise, and a couple learning how to make each other happy.  There’s also great sex.  Can anyone claim those are bad things for which to aspire?

As for your question about romance books being unrealistic. It’s true.  Romance novels are fiction. We don’t hang around these fictional couples long enough to write about how the man starts leaving the toilet seat up, and how he’s flexing his muscles while nude in front of a mirror and becomes more of an eye roller than a sight for sore eyes.  Or about how we women may put on some pounds and get a few stretch marks. My husband and I have been married thirty-three years.  We’ve argued, disagreed, I’ve been known to nag some and he farts in bed.  Most of the time, sex isn’t mind blowing, but it’s still good.  Yet, we’ve stuck by each other, we respect each other, and we support each other. Now, if I had to write our story, I’d take out some of the nags, farts, and add more mind-blowing sex—I’d probably leave the naked flexing in front of the mirror.  Heck, I might even leave in the farting—but the most important part of our story would be the love and devotion. And that is not unrealistic.

My fans tell me I have a southern voice.  It makes sense.  Southern is what I know.  I have southern beliefs.  I’m kind, and even when pissed, it takes a lot to make me say more than, “Bless her heart!” And as my grandmother said, “Every southern gal must know how to fry a mean bird.”  Most of my characters are southern.  But I think the biggest way it has influenced my writing is that I’m a storyteller.  When we went to see my grandfather, we would sit around on the floor and we’d listen to him tell stories.  At the dinner table we told stories.  And they’d better be interesting.  It didn’t matter if you had to fictionalize them some, the stories needed to be intriguing.

I’m dyslexic and while storytelling might be a natural talent, writing wasn’t.  I had to learn to write.  And it was no easy feat.  It took me ten years to sell my first book.  And thirteen more before I sold my second.  I don’t have the educational background of some writers.  I’m self-educated, and I mainly taught myself to write by dissecting books.  Although I do have to say, I learned a lot by attending meetings through RWA over the years. But being dyslexic, I learned to persevere.  Writing is so important to me, that I want to share that passion. I think passion is the key element to teaching.

I love traveling.  I’ve been to France, South America, China, England and Denmark.  Now while I love seeing landmarks, history, and beautiful landscapes, what I love most is getting to know the people.  My Denmark trip stands out because the librarians who brought me out, took me into their homes and I got to know them. I got to peek into the real lives of Danish people. I learned how they live, their passions, their way of life.  I look forward to getting to know the people in New Zealand.

And five fun quick, questions to end on…

.1 If you could bring one fictional character to life, who would it be and why?

Charlotte in Charlotte’s Web.  I would be scared shitless because I’m terrified of spiders.  But that was the first chapter book I ever read.  And there was something about her characterization that I fell in love with.  I think all my characters have a little of Charlotte in them.

Okay, the southern gal in me is trying to get me to lie.  But I will be honest.  It’s shit.  It was my father’s favorite word.  And what can I say, I’m a daddy’s girl.

Can’t.  I hate it when someone tells me or someone else they “can’t” do something.  It makes me want to prove them wrong.

So I hope you enjoyed this interview, and maybe learned something new about me. As I said, I’m still in NZ, and I’m having a blast. I’m taking lots of pictures and I’ll share them with you when I get home.