Are you ready to meet Riley Smith?

If you loved Kylie’s compassionate side, Della’s spirit, and Miranda’s zaniness, you are going to love Riley.  She’s spunky.  She’s spirited.  She’s full of sass.  And she sees dead people.

It won’t be long until The Mortician’s Daughter: One Foot in the Grave is released on Oct. 31st. Yes, that’s Halloween, and that seems appropriate since Riley Smith sees ghosts. She even tries to help them resolve their problems and finally cross over. But not all ghosts are easy to help, and some aren’t easy to let go of.

And . . . for you guys who can’t live without a print copy, The Mortician’s Daughter will also be out in print.  More details about that soon!

Her dad’s job is with the dead . . . and he’s bringing his work home with him.

Once again, seventeen-year-old Riley Smith is the new kid in school and her dad’s career has her back to being dubbed a freak. Truth is, she’s a much bigger freak than her classmates think. The only company she keeps these days is the dead who follow Dad home from work. She can see them. She can speak to them. And Fate seems to think she can help them solve their last problems so that they can move on to the other side. Which is odd, because with the loss of her mother and her father’s alcoholism, she’s got enough problems of her own.

But nothing could prepare her for the next tormented young spirit who darkens Riley’s door. The young woman’s death wasn’t the accident everyone believes. Soon Riley finds herself face-to-face with the killer and her only protection comes in the form of another spirit, Hayden, a boy her age with a heart-melting smile and understanding eyes that make her feel safe. If she can escape becoming the killer’s next victim, Riley knows she’ll have to help Hayden move on too, but what if she can’t let him go?

If you’d like to read an excerpt from The Mortician’s Daughter: One Foot in the Grave, just click HERE.

Did you know One Foot in the Grave is only the first of three books in the series? Oh yeah, Riley Smith is going to be hanging out with me for a while. Hopefully, you’ll enjoy her company as much as I do. And for those of you who want a print version, well, the print version is now up for pre-order! You can get it at Amazon. 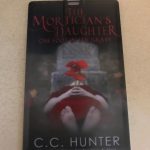 I’m giving away two USB drives with The Mortician’s Daughter: One Foot in the Grave on it. I love these.  Plus, it has extra room for you to store other things. To enter share the link to to the excerpt on your own social media page and leave me a post here saying you did it. 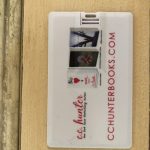 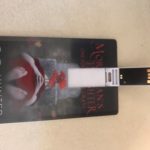 14 thoughts on “Excerpt and a Contest!”