I have a special guest on my blog this week. Christina Mandelski just released her second book, The First Kiss Hypothesis, and she’s here to tell us about it.

But first, let me tell you a bit about my friend, Christina. Like me, she lives near Houston with her husband, two young adult daughters and a mustachioed cat named Leonardo DiCatprio. She spends her day doing what she loves—writing stories for kids and teens. When she isn’t writing, she loves to spend time at the beach, with friends, traveling, reading and eating, especially cake. Always cake.

Thank so much for having me on the blog today – I’m such a huge fan of Christie as an author and person, I’m honored! My first young adult romance, The First Kiss Hypothesis, is out now from Entangled Crush. 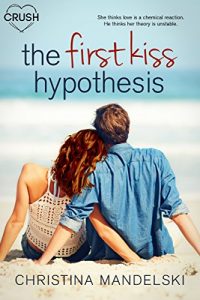 My main character Nora Reid believes scientific laws control everything, even love. With her grandparents’ epic first kiss story cemented in her brain, Nora develops a hypothesis she’s determined to prove: for each person in the world, there is exactly one other person, and at first kiss, they’ll experience an immediate and intense reaction.

But after four years of zero-reaction kisses, she comes up with a new theory: maybe that pesky crush on her stunningly hot best friend Eli Costas is skewing her results.

She needs to get rid of him, and fast.

Eli Costas is an injury-prone lacrosse star with a problem—the one chance he had at winning over the girl next door resulted in the most epically sucktastic first kiss ever. And now she’s…trying to get rid of him? Hell no. It’s time to disprove her theory and show her exactly what she’s missing.

You can order The First Kiss Hypothesis at Amazon, IndieBound, iBooks and Barnes & Noble.

Speaking of the wrong person, I look up and lock eyes with Eli Costas, strolling toward me with a slight limp.

Immediately, my brain short-circuits and I forget what I’m doing.

Eli. Neighbor, best friend, part-time chauffeur. That hair, dark and wavy, sticking out in ways that invite you to run your fingers through it. The olive skin like a real-life Greek god, and eyes that look just like the blue oval in the watercolor sets Mom used to buy me when I was little. He’s tall, and a lacrosse maniac with an upper body to prove it. Your basic unrealistically attractive high school student usually only found in books or movies. The difference is, he’s real, and everyone wants him. Including me. It’s a battle I fight daily.

He flashes me a grin. One side of his mouth quirks up higher than the other, and a dimple cuts deep into his cheek. Holy cow.

As he moves into my airspace, I force myself to focus on counting the tortoise money. Five. Ten. Fifteen. Twenty. Twenty-five. Forty. It always takes me a minute or two to get my bearings when it comes to Eli. To remind myself that nothing can happen between us.

And now for a few questions…

My heroine, Nora, is different than me in many ways—especially given that she’s really, really good at math and science. I couldn’t be worse at these things—I can refer you to my high school report cards as evidence. Where we are alike, though, is that she believes that true love exists – and that it’s worth the wait. I believed this in high school, and had no intention of settling for less than the real thing. It took a while, and sometimes I thought it would never happen, but I eventually found my Eli, just like Nora does in the book. She learns that falling in love always requires some risk. It’s not an exact science, but it’s still worth going for. Another thing Nora and I have in common? God, I love pie!

What scene did you love the most?

There’s a scene that takes place in the garage of a house party – inside an old car (in my mind it’s a 70s model red Chevy Chevette – which was my dream car when I was eight years old!) This is the scene when they almost kiss, and there’s a huge shift that upsets the entire balance of their lives and friendship. I think I love this scene so much because it reminded me of a scene from a John Hughes movie – I was the target audience for those movies in the 80s – Sixteen Candles, Pretty In Pink, etc. and they really did play a role in making me the romantic sap that I still am!

What did you learn when writing this book?

I learned how to write category romance! My first book, The Sweetest Thing, came out in 2011, and it’s a stand-alone title. There is teen romance in it, but it’s not the central focus of the story. There is a lot of stuff about family, and friends and relationships. In The First Kiss Hypothesis, Eli and Nora’s building romance is the central focus, and even though the characters have family and friend issues – the story never strays too far from the attraction that is ratcheting up between them. Other things are going on, but it’s all about the increasing heat between them – until they get to the point when neither of them can deny it any more and then, BOOM! I loved it, thought it was great fun and can’t wait to do it again with the companion book coming out in spring 2018. 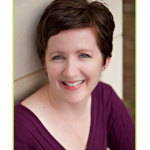 Want to win an e-copy of The First Kiss Hypothesis? Leave a comment below to enter this giveaway. (This giveaway is for U.S. residents only. If you’re reading this on Goodreads, you must leave your comment on my blog page to be entered.)