In This Heart of Mine, Leah MacKenzie receives the heart of Eric, a fellow classmate. Not long after she gets out of the hospital, she finds herself craving Indian food, an ethnic food she never cared for before. She even ends up in the same Indian restaurant that Eric used to frequent because he loved their food.  Is that possible? Can that really happen with transplant patients? The answer is that in at least ten percent of all transplant cases, patients report these happenings. Yes, there are many documented stories of organ recipients suddenly developing a taste for a food they never liked before only to find out their donor loved that food. It’s a phenomenon known as organ donor transference.  After his transplant, my husband suddenly found himself craving barbecue.  And before, he simply wasn’t a big fan.  For months when he’d go out to feed this craving, he’d tell me, “I’m going out to feed the kidney.”

There are also cases of transplant recipients developing a liking for the same kind of music their donor loved, or changes in personality similar to that of the donor, 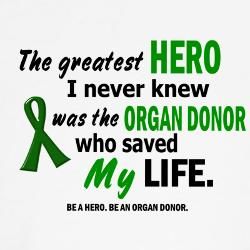 developing artistic tendencies when their donor was an artist and even solving a murder. Yes, like Leah, there was a case of an eight year-old girl, who received the heart of a murdered ten year-old girl. She soon began having recurring vivid nightmares about the murder. Her mother arranged a consultation with a psychiatrist who after several sessions, concluded that she was witnessing actual physical incidents. They decided to call the police who used the detailed descriptions of the murder (the time, the weapon, the place, the clothes he wore) given by the little girl to find and convict the man in question.

Now, it is important to note that apart from miscellaneous information such as gender, age and cause of death, profiles of organ donors are traditionally concealed from their recipients for psychological reasons. So these organ recipients had no idea what their donors liked, disliked or how they behaved.

Are they doctors who argue with this theory?  Yes.  They believe that not all cells carry memory.  But so far there had been no proof that they don’t carry memory.

In my husband’s case, he actually had a reoccurring dream after his transplant.  And for as long as I’ve been with my hubby, he’s only been able to recall about five or six of his dreams.  This dream was that he’d wake up and there would be an old man staring him right in the face.  He kept having that dream for about three days.  Then we found out his donor was an older man. Now, the doctors told us that some of the medicine he was on could bring on weird dreams.

And yes, it could have been his meds, but . . .  I’m really doubtful.  I know it all sounds a little woo-woo, but aren’t there a lot of things in life that are hard to explain? You have a dream and it feels like a warning.  You pick up the phone before rings.  You think about an old friend you haven’t seen in years, and then you discover they died the day they came to your mind.   Do you believe in things that are hard to explain?

Jennifer Prager, you won an ecopy of This Heart of MIne. Congratulations! Please email me at cc@cchunterbooks.com and let me know if you prefer the Kindle or NOOK version.