Anyone who knows me knows I love animals. I’ve had dogs and cats, but one dog in particular tugged hard at my heart strings. So, when I was asked to write a Furbabies blog for One Writer’s Way for April 6. 2018, I immediately thought of Jake. I wanted to share his story with y’all, too. 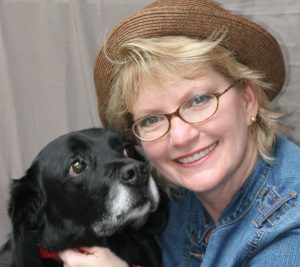 One cold November day, a big black, mixed lab dog followed my son home from school. I’d only recently lost Bosco, a misbehaving and totally lovable Boston Terrier whom I’d had the terrible misfortune of seeing get run over.  I was in the “Don’t-Want-Another-Dog” stage because it hurt too much.  I was actually out of town on business.  Hubby called and told me about a big black dog with a gray snout.  I didn’t want a dog, but I especially didn’t want a big dog.  Nope, I did little dogs.  And I’d heard how much black labs shed.  Nope, Hubby needed to find who owned the dog and get him back home.  Not a problem, my hubby said, the dog had a collar with two dog tags.

Unfortunately, one tag was for a Chihuahua, and one was for a Great Dane.  Hubby put out signs, but no one came to claim my son’s newest find.  “He’s sweet, Mom,” my son told me over the phone.  “He’s smart, too.”  He tells me how the dog would follow all the basic commands of sit, shake, and roll over.  But my heart was so broken, and I still had flashbacks of seeing Bosco run over, seeing the crazy dog that brought us so much pleasure, take his last breath. 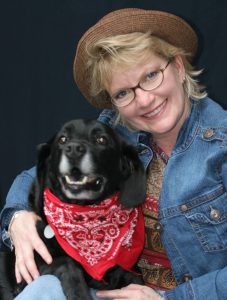 “Don’t get attached,” I told my son. “When I get home I’ll find his owner.”  Well, I was wrong.  I didn’t find his owner, but that dog found his.  He took one look at me, and I saw it in his big brown eyes.  “You are my person!”  Even hubby and son were shocked at how the dog ignored them and was all about me.

“Nooo,” I told him and left the room, but he followed.  He followed me to the bathroom, to the bed, to my office where I spent hours writing my novels.  Hubby would try to coach him away from me with food.  Even bacon wouldn’t get this dog to leave my side.  I relented to keeping him.  How could I take him to a shelter when he was old and probably wouldn’t find a new home.  But I still didn’t want to be his person.  “Choose the boy,” I told him. “He’ll play ball with you. Or choose the hubby, he’s going to be the one to feed you.  All I do is sit in my study and write, you don’t want me as your person.”  But big black dog, now named Jake, wouldn’t hear of it.  I didn’t get a choice.  I’d been chosen.  I had a shedding, big, black labish dog as my sidekick.

Jake liked the boy, he liked my hubby, but Jake was one of those one-person dogs.  And from the moment he looked at me, I was it.

I tried not to love him, but when someone, even a dog, loves you that much, when he looks at you with such devotion… Well, I fell madly in love with Jake.  The vet said he was probably around eight years old.  He lived another six.  Six glorious years, I had a best friend who left a trail of black hair whenever he walked, a best friend who thought I walked on water.   A best friend who broke my heart when he died with his head in my lap. 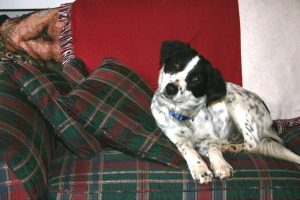 To this day, I miss my best friend.  Yes, it took a while, but eventually hubby went to the junkyard and came home with a Falcon Ranchero and a dog.  A very sick dog.  The vet said she wouldn’t have lasted another few days.  She gained nine pounds in one week.  Lady is not your normal junkyard dog, she’s sweet, sassy, and I love that girl. But Jake will forever have a special place in my heart.

I’ve always heard and believed that animals make us better humans.  For that reason, almost every book I write has either a dog or a cat. This Heart of Mine, my latest release, stars a golden lab puppy, named Lady.  Matt, Lady’s owner, had lost his father and now his identical twin brother.  Lady offers Matt love, loyalty, and a lot of laughter.

Do you have a fur baby? Is it a dog or a cat? Or something else? What’s their name?

This Heart of Mine

A new heart saved her life—but will it help her find out what really happened to its donor?

Seventeen-year-old Leah MacKenzie is heartless. An artificial heart in a backpack is keeping her alive. However, this route only offers her a few years. And with her rare blood type, a transplant isn’t likely. Living like you are dying isn’t all it’s cracked up to be. But when a heart becomes available, she’s given a second chance at life. Except Leah discovers who the donor was — a boy from her school — and they’re saying he killed himself. Plagued with dreams since the transplant, she realizes she may hold the clues to what really happened.

Matt refuses to believe his twin killed himself. When Leah seeks him out, he learns they are both having similar dreams and he’s certain it means something. While unraveling the secrets of his brother’s final moments, Leah and Matt find each other, and a love they are terrified to lose. But life and even new hearts don’t come with guarantees. Who knew living, took more courage than dying?

Matt gulps fear down his throat and stares at Leah’s front door. Lady, on her leash, is trying to chew herself free. Matt can relate. With what happened last night, and not knowing what her parents know, it was hard to show up this morning. Even harder to come back the second time.

A phone rings behind the door.

Nerves gnaw on Matt’s sanity. If her father opens the door and says Leah’s still asleep,

Matt’s gonna know the truth. Leah is refusing to see him. And then what? Damn it. She said she’d help. And with his mom riding his ass, he could really use some help. Why would Leah turn her back on him? Seeing him with Paula?

Matt had explained that Paula wasn’t . . . his girlfriend, hadn’t he? Then again, how could she be upset about Paula when she was attached at the hip to Trent Becker, and all snug and warm wearing his coat?

Matt pushes that whole bitter thought aside. Leah and he are just friends.

Yeah, they kissed and it was awesome, but that was then.

An uncomfortable thought hits. What if Leah told her parents she has Eric’s heart? Maybe it’s her parents who don’t want him here?

Footsteps sound behind the door. He stands straighter. The door swooshes open. Mr. McKenzie, holding a phone in his hand, in a at-footed stance just stares.

Matt waits to be sent packing.

Not really. But does he have a choice? Matt remembers Lady. Maybe he does have a choice. “I’ll wait. I have my dog.” Mr. McKenzie stares at Lady. A jolt of nerves skateboard down Matt’s spine. The meeting-the-dad-of-the-girl-you-like kind of nerves. Not that this is a date. Does Leah’s father know that?

“Then come in. The shower’s going. She might be a while.”

He pushes open the door. Matt barely crosses the threshold when Mr. McKenzie looks back at Lady and says, “But if she’s the sort that poops and pees, you clean it up.”

“Of course.” He scoops up the squirming puppy. Her big yellow paws tread the air and her pink tongue is busy trying kiss his face.

Leah’s dad leads Matt into the kitchen. “Have a seat.”

Matt’s unsure if the man is being nice or is about to interrogate him. Matt pulls the chair out from the table, leaving room for Lady in his lap, then drops in the seat. Mr. McKenzie remains standing and staring. The dog starts twisting and turning, right along with Matt’s insides.

“How do you know Leah?” Mr. McKenzie settles in a chair.

Here comes the interrogation. “At school.”

“You tutored her once, right?”

“Yes, sir.” Lady barks, wanting down. She starts the whimpering. Matt sits her on the ground, but holds her leash and hears her sniffing around for table crumbs.

“You’re a senior, too?” Mr. McKenzie asks in a non- interrogation tone.

“Yes, sir.” Matt wishes he could drop the “sir,” but when you had a father in the army, “sir” is ingrained in you.

Her dad runs his hand over the edge of the table. “My wife mentioned you’re a twin?”

Was a twin. Matt’s nod is small.

Matt nods again, this one slower. He’d done a lot of nodding with people who didn’t know. It hurts less than explaining.

“Kenner?” Her dad tilts his head slightly to the right as if . . . His eyes round. Instant pity turns his blue eyes a shade darker.

Matt nods. This one hurts. Thank God, he didn’t say killed himself.

“I’m sorry. My wife hasn’t kept up with the news. And I didn’t put the twin thing together.”

“It’s okay,” Matt offers the hated pat answer and thinks shit. Then he smells it. Shit. Dog shit. He ducks his head down and moans. Lady’s in full hunched mode doing her business. Mr. McKenzie leans sideways and peers under the table. Their frowns meet. Effing great! “I’ll get it, sir.” Matt loops the leash around the chair, bolts up. “Paper towels . . . ?”

“On the counter.” Mr. McKenzie’s voice is muffed from covering his nose.

Matt, paper towels in hand, crawls under the table. “Not ladylike,” he scolds Lady, using his mother’s words and tone. The puppy plops down in a poor-me pose. Matt scoops up the crap and is attempting to crawl on three limbs when he hears footsteps.

Still under the table, he glances out and up. Leah’s standing in the kitchen doorway. She’s wearing soft-to-touch-looking faded jeans that aren’t tight but hug her every curve. The red sweater she’s wearing does to her top what the jeans do to her bottom.

“Where is he? You told him to wait, didn’t you?” Disappointment slides off her words. Matt almost smiles realizing she wants to see him.

Lady, past the pathetic mode, dashes from under the table, taking down a chair as she goes.

Leah squats down. Their gazes meet, hold, then her focus shifts to his hand holding . . .

Damn! Of all the ways a guy didn’t want a hot girl to see him, down on his knees holding a towel of dog shit has to top that list.

Leah’s surprise fades into something softer, sweeter. A sparkle lights up her blue eyes. They crinkle at the corners with humor, and her face transforms into one big, so-damn-beautiful smile. He’s captivated.

She giggles—falls back on her butt. Lady rushes her with puppy excitement.

Leah’s laughter is like a song you want to sing along with. One he hasn’t sung in a long time. He wants that back. He wants to be able to let go of the pain he’s felt since his father died, since his brother died, and laugh like that. Laugh so free—free of grief.

Then Mr. McKenzie’s laughter roars above. Even Lady makes happy puppy sounds. Then it happens. A light feeling swells in his chest and his own laughter spills out. He can’t remember the last time he’s laughed so spontaneously. But for these few seconds, he doesn’t want to think about it.

He just wants to enjoy it. He knows it won’t last long, because in just a minute his heart is going to remember everything he’s lost.

If you haven’t read This Heart of Mine, you can order your copy today at Amazon, Barnes &Noble, Powell’s, Indiebound, Books-A-Million, and iBooks.