Most parents harbor a fear, the worst fear imaginable—their child goes missing. Whether it’s a teenager or a small child, it’s a parent’s worst nightmare.

According to the National Center for Missing and Exploited Children, roughly 800,000 children are reported missing each year in the United States — that’s roughly 2,000 per day. And we’ve all heard the stories about the teen or child abducted and held prisoner for years until they escape one day. But most of these children that go missing are never found. Some are presumed dead and others, well they just don’t know. If you watch TV shows like Criminal Minds or CSI, you’d believe there are kidnappers randomly grabbing people off the streets, but actually only about 1 one hundredth of 1% of kidnappings are committed by strangers. Far more common are children who have run away, have gotten lost or injured, have been taken by a family member (usually in a custody dispute) or simply aren’t where they’re expected to be because of a miscommunication. 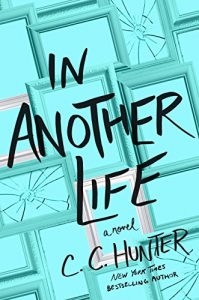 So, when I decided to write In Another Life, my YA coming out March 28, 2019, it started with an idea I’d had a while ago. What if you saw an age progression photo of a missing person, and it looked just like you? What if you also knew that you’d been adopted? What would you do? Would you think it must be you or would you blow it off as a coincidence? That’s the dilemma Chloe Holden is faced with in In Another Life. What does she do? Well, with the help of a cute guy, she looks into her adoption—and falls into danger. And since it’s a CC Hunter book, you know there is a happy ending, that Chloe survives to discover the truth. So at least her story has a happy ending—although there’s plenty of suspense getting there.

You can pre-order In Another Life now at Amazon, Barnes & Noble, Books-A-Million, Indie Bound and Powells.

4 thoughts on “A Parent’s Worst Nightmare”